So far as I understand it science fiction uses consciousness almost as a subtle convention itself. The embodying idea of the state of consciousness is argued through different monsters or landscapes that enter in through either the writer’s decision or some manifest of his subconscious. This sort of thought leads me to the discussion in class on the tentacle monster from H.G. Wells TheTime Machine. I understand that it represents the sort of changing illusory nature of our subconscious and how you don’t really know what it is until it is upon you. I also remember Prof. Simpson lecturing about how consciousness is often portrayed as a great sea, that it is a divide between what we know and what we do not know. That when you would look into the water it would be pure blackness that would greet you, and a lot of thoughts regarding horror and unknowingness would come out of that.

I have recently worked with a lady who is a self proclaimed “reader”. She is important because she said taht she enjoyed the genre of science fiction but that she did not often find a novel that she made it more than partially through before deciding that they story was to “out there” for her to enjoy. Having realized this point she decided that she enjoyed the movies more than the novels but was not against trying to read further novels.

This conversation, and the previous blog entry, made me think that perhaps people do not realize there is a difference between fantasy and science fiction, and that both of these catagories also have sub genres. Perhaps the reader should disreguard the genre of science fiction and decide what other genre they enjoy; of course leaving the interest in science fiction as an underlying truth. This notion would allow the “interested” but “deterred” party to better identify which novels the intended reader would make it all the way through. For instance China Mieville’s The City & The City can be read as a detective fiction novel; H.G. Wells’ War of the Worlds,  granted as somewhat of a stretch, could be read as a romance, on the idea of a man going through horrendous feats to get back to his wife; and Edgar Rice Burroughs’ John Carter of Mars can be read as either an adventure or a romance, this romance is not such a stretch as it involves a man falling in love and rescueing his fated love. While I am aware that scientific romance was a term used instead of the term science fiction when H.G. Wells was writing his novels, it is not the same as the sub genre I am purposing. Therefore, I feel more readers would benifit from the all inclusion of sub genres, in this I mean the inclusion of romance, detective fiction and so on to influence the prospective readers. This would disuade the idea that science fiction is merely about space and the aliens humanity would discover there.

As a reader of both fantasy and science fiction, an idea I like to think about a lot is combining the two genres into one. Is this possible? Both can certainly be combined with third genres, like the Western genre; Firefly puts Western plots in space, and Brandon Sanderson inserts Western devices into his fantasy world in The Alloy of Law. However, sometimes it seems like fantasy and science fiction are too far apart to be combined. Lord of the Rings is definitively fantasy, with not the slightest amount of plausibility.

Similarly, novels like Ender’s Game have the necessary elements of science-fiction such as plausibility and technology, with all its elements different from our world easily explained with “science.” Nothing is left to “magic” or fantastical elements.

Another Orson Scott Card novel, Pathfinder, is set up like a fantasy world at first, but (spoiler alert) later on the reader discovers the world has originated from space travel in the distant past. From that point on, the novel reads more like science-fiction than fantasy; while the two are present in the book, they are separated, unable to merge in the reader’s mind.

However, there is one work that is seen as central to most people’s ideas about science fiction that is actually a combination of both fantasy and science fiction: Star Wars.

Think about it: both magic and technology are used to explain elements in the movies. Space travel is achieved through hyperdrives and other technologies, but the source of Jedi power is from a mystical force called…the Force. While the prequels try to give the Force a scientific grounding with the invention of midichlorians, the Force is basically a magical source of powers that is neither explainable with science, nor plausible.

If these are two of the most important concepts to keep in mind when considering what makes science-fiction science-fiction, does this make Star Wars something else? I personally like to call the series “fantasy in space,” which, considering my interests in fiction, makes me quite content.

What do you think?  Is Star Wars its own genre, mostly fantasy, or simply all-out science-fiction?

Gollum, from Lord of the Rings: The Two Towers

Yoda, from Star Wars Episode III: Revenge of the Sith 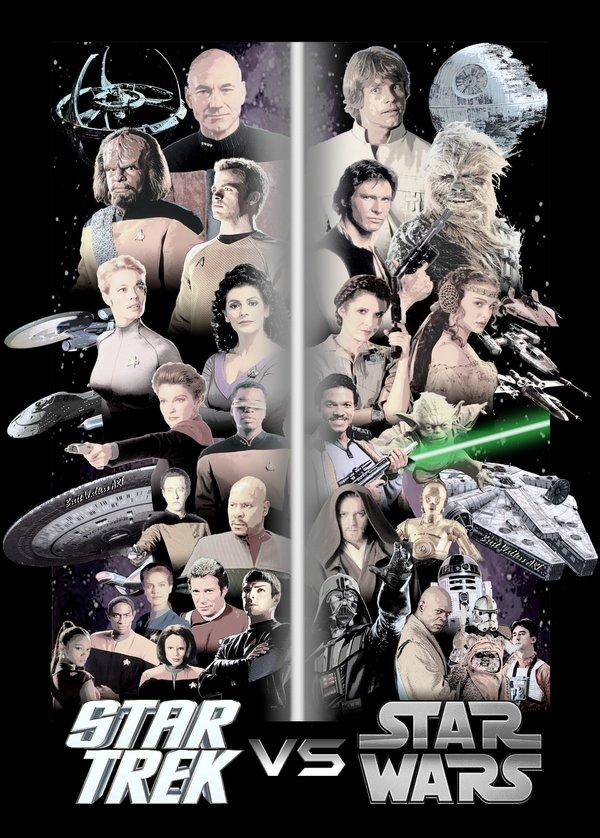 I have been introduced to the idea that true Star Trek fans do not appreciate Star Wars. Therefore, I would like to pose the question: Why do Star Trek fans have such a dislike for Star Wars? I understand both of these shows on a basic level, which may influence my confussion. My understanding is as follows. Star Trek revolves around space travel and the helping and investigating of new or unknown worlds and the civilizations that inhabit said worlds. In this structure humanity plays a role but it works with other civilizations and is not always the main race, having said that however, I have notices that humanity is not the “evil” race in the majority of the episodes and when it is the “evil” that needs to be destroyed it is either a rogue being or a misunderstanding. Star Wars, on the other hand, seems to be more movie based then television show based, although plenty of novels were written in which these movies base themselves off of and Star Trek has old and new movies. Star Wars deals with all races on the same level, there doesn’t seem to be a favorite race even though Luke, Han Solo, and Leah are human in appearance. The fight is not between races but between “good” and “evil”. Where Star Trek wants to discover new worlds, Star Wars wants to free the worlds from tyranny. These two are quite close in story lines and themes which is aprt of why I do not understand where the dislike stems from, unless the problem is that they are so similar. Perhaps this hatred has developed from the idea that Star Wars is taking away some of the fame entitled to Star Trek, or perhaps because Star Wars was named one of the best special effects movies of it’s time. My aim is to understand why Star Trek fans would disreguard and dislike Star Wars as much as I have been led to believe, why can’t we all just get along and be fans of both? Why is there a need for the hatred of Star Wars?

Can’t we just get along?